A shocking new study produced jointly between the TUC (Trade Unions Congress) and the Everyday Sexism Project has revealed that 52% of women have experienced an incident of sexual harassment during their working life. A third of women also experienced unwelcome comments and a quarter spoke of an occasion involving unwanted touching. However, the majority of women choose not to report the episode to a relevant administrative body. 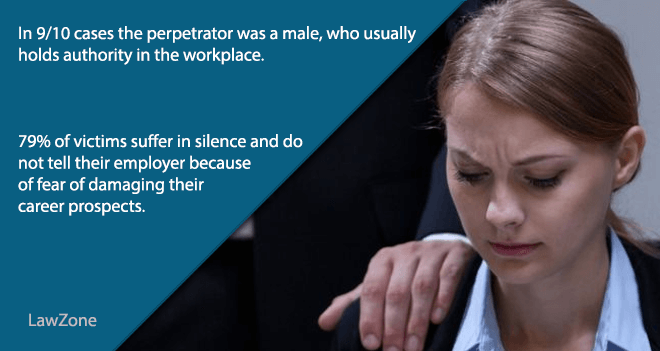 Frances O’Grady, the general secretary of TUC, has been highly critical of these findings. Speaking on the Radio 4 Today show, she explained that many women refuse to report harassment because they feel ‘ashamed and frightened’ by the experience: “It makes us miserable at work where we just want to do our job and be respected.”

O’Grady also challenged the long-held assertion that certain comments are only ‘a bit of banter’ that female workers should rise above:
“How many times do we still hear that sexual harassment in the workplace is just a bit of ‘banter’? Let’s be clear – sexual harassment is undermining, humiliating and can have a huge effect on mental health … It has no place in a modern workplace, or in wider society.”

One of the reasons why sexual harassment goes unreported is that many women feel they will not be believed, with 24% of the women polled who have suffered discrimination citing this as their reason. Moreover, 15% fear that making a disclosure will harm their career prospects, and 28% are concerned that speaking out would harm their relationship with co-workers. For 20% of women, it was the embarrassment of making a disclosure that prevented them from reporting.

Sexual harassment does not need to be a blatant act of sexual assault, although this did indeed account for 1% of the cases these women disclosed. Abuse can instead take the form of subtler acts that other members of staff may not detect. This includes inappropriate hugging and comments of a sexual nature, either direct or indirect.

The report also found that sexual harassment is particularly prevalent for women seeking arrangements such as flexible working or opportunities for training and development as this may place them in a seemingly dutiful position. The legal profession is one of the industries found to have a high level of sexual harassment.

The TUC report found that 90% of sexual harassment cases involved a male offender, which in 17% of all cases was the victim’s line manager or equivalent authority who they had to deal with on a daily basis. Behaviour of this kind is largely allowed to occur due to hidden ‘power dynamics at play’ which the usually male harasser uses to exploit female workers.

The report also concluded that younger women aged between 18-24 are the most likely to experience harassment. A total of 63% of the 130 women in this age bracket who were interviewed reported experiencing harassment.

Younger women are more likely to be employed in junior roles through temp agencies or to receive zero hours contracts, which TUC believes are contributing factors.

The report has been described by the TUC as the biggest sexual harassment study for a generation, and Laura Bates, the founder of the Everyday Sexism project, has expressed how serious the report is:
“This research shows there’s a huge gap between that perception and the reality of what women are facing. […] Many people would like to think that workplace sexual harassment was a thing of the past, in reality it is alive and well, and having a huge impact on tens of thousands of women’s lives.”

The findings have already influenced the Labour Party to back TUC intentions to reinstate parts of the Equality Act that would make employers more liable in harassment cases. Moreover, the TUC is now campaigning for the government to scrap the £1,200 employment tribunal fees that employees must pay before a hearing can be granted as it believes this is discouraging women from seeking legal action.

A government spokesman has released a statement in response to the report: “No one should experience harassment or abuse of any kind in the workplace [..] Section 40 has not been scrapped and any employee who experiences harassment is protected by the Equality Act – regardless of who the perpetrator is.”