An employee who has been subject to bullying and harassment at work is entitled to take action. The difficulty usually lies in being able to establish whether bullying and harassment has actually taken place, or if the behaviour concerned amounts to something less serious. Whilst the information below applies generally, the circumstances of a situation will usually have a significant impact on the claim being made, thus every case should be considered on an individual basis.

Although bullying is something most of us expect to leave at the school gates, unfortunately it is often present in the workplace. It is essentially unwelcome or unwarranted behaviour that has a specific objective – to injure, humiliate or denigrate – and may be behaviour of an insulting, offensive, malicious or intimidating nature. A complaint of bullying cannot be brought before an Employment Tribunal but this may be relevant to making a claim in a County Court (see below).

Harassment at work is demeaning and unacceptable. This constitutes behaviour or comments that create an environment of humiliation, hostility, offensiveness, degradation or intimidation for an individual which violates that individual’s dignity in the workplace. ‘Harassment’ has a very specific meaning under the Equality Act 2010 (‘EA’), which consolidates all previous equality legislation. Such law protects against harassment and/or discrimination as a result of: 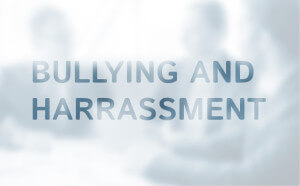 Where bullying and harassment at work do not fall within the EA, the behaviour may be prohibited by the Protection From Harassment Act 1997 (‘PHA’). The PHA has a much wider scope than the equality legislation, as it does not specifically define harassment as the EA does. There is no need to prove any type of physical or psychological injury under the PHA, however, these cases can be difficult to establish. A one off incident of unfair or unreasonable treatment will not constitute harassment under the PHA as there must be a series of acts (at least two) that are so oppressive on an individual that they could possibly result in a criminal sanction. There must also be a strong link between the employee’s work and the harassment in order to make the employer responsible. An employee has six years from the date of the harassment to make a claim under the PHA.

How bullying and harassment at work can occur:

Although bullying and harassment can take many forms, there are a number of obvious situations in which this kind of behaviour can occur:

1. Bullying and harassment by a senior – for example a supervisor enforcing an excessive workload, making unreasonable deadlines and criticisms of a subordinate, reducing the responsibilities of a subordinate and/or passing on only basic tasks, humiliating or making fun of a subordinate, preventing promotions or leave being taken;

2. Bullying and harassment by a colleague of the same level, for example using threatening or abusive behaviour, physical assault and making practical jokes or teasing.; More unusually, this behaviour may be the result of the actions of a more junior colleague;

3. Groups of colleagues picking on another colleague;

4. Harassment may also occur as a result of behaviour that is motivated by a belief that an employee has a characteristic they do not (for example, being ‘foreign’), or because of someone else (for example, because of a gay sibling).

What action can be taken?

Where there is bullying and harassment that falls into one of the EA categories, a claim can be taken to an Employment Tribunal. The claim must be made within three months and one day of the date of the discrimination.

If there is psychiatric injury as a result of the bullying and harassing behaviour, or the behaviour does not fall within the EA coverage, a County Court claim may be pursued. Here, it must be established that an employer knew in advance that the behaviour would cause psychiatric injury, not just embarrassment, frustration, or upset, for example. Because this can be difficult to prove, success in a claim of this nature (a ‘stress at work’ claim) will usually require evidence of a previous stress-related/psychiatric condition as a result of which the employee has been absent. An employee will have three years from the date of the onset of the psychiatric condition to bring a claim and will be personally liable for the costs of making the claim if it is not proven.